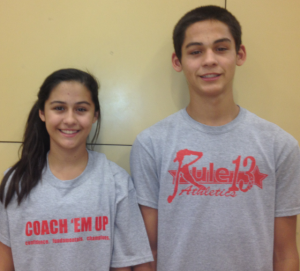 One of, if not the most exciting and rewarding parts of coaching is seeing players grow, learn, and ultimately meet their goals! COACH ‘EM UP is proud of ALL our student-athletes for trying hard, working hard, and giving their best effort. We see “success” in many forms and we have had many of you share your small and large success stories with us – thank you!

It is through your stories we are all inspired. We say, well done, congratulations, and let’s keep striving to find the ultimate you! COACH ‘EM UP is thrilled to announce a feature blog series to share with you stories of passion, goal setting, hard work paying off, and triumph through hours of training. For those who didn’t make the team, who can’t seem to climb that huge mountain in front of you, who feel like they’re off to a ‘late start’ or who may have endured an injury, we say – don’t let anyone dim or even darken you dream.

Our first COACH ‘EM UP KID Success Story features a sister-brother duo! Haden and Brock have played many sports, in many leagues, for many teams, for many years! They have grown up in a gym or on a playing field. Most recently, Haden had an amazing summer! She played and completed on three national teams; two basketball and one volleyball. Haden traveled with these team to Oklahoma City and Dallas. Haden currently played a successful season of Field Hockey and is playing on a top-level volleyball team! Brock’s 7 on 7 football team won the State title in College Station this summer. His year round select/travel basketball team competed throughout the state, winning numerous tournaments. He recently finished a successful season of tackle football for his school and weeks ago, he was named MVP of a Regional Showcase Basketball Tournament. Both Haden and Brock start their school basketball season this week – good luck!

Congratulations, Haden and Brock! COACH ‘EM UP KIDS since 2008!